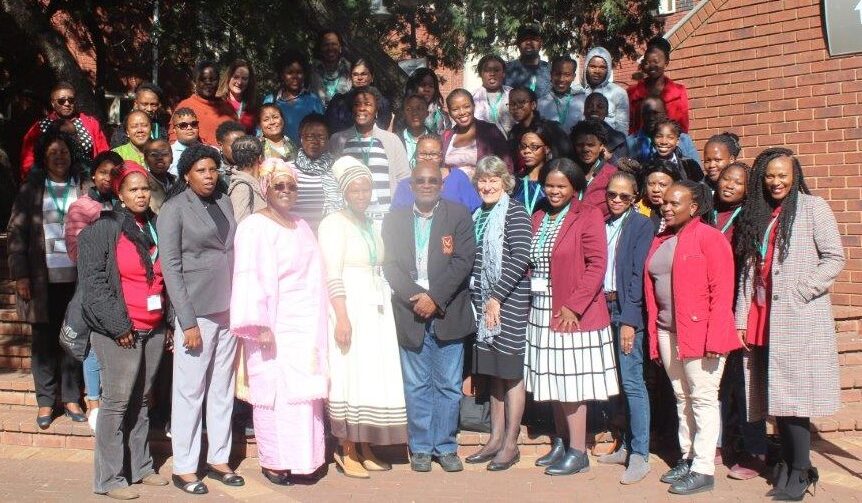 Women have been historically underrepresented in the Science, Technology, Engineering, and Mathematics (STEM) professions worldwide. The situation (underrepresentation of women) is substantial in Africa. According to estimates by the UNESCO Institute for Statistics, women represent less than 30% of the research workforce worldwide. The underrepresentation of women in STEM translates into a loss of a critical mass of talent, thoughts and ideas, which hinders countries from reaching their maximum development potential. There are some contributing factors that have been attributed to the underrepresentation of women in STEM. These include (but not limited to) socio-economic factors; the masculine image of science; lack of mentoring; limited platforms for women in mathematics to share their research, network and empower each other; a few role models; and lack of confidence in mathematics.

The SAWMSA workshop featured several thought-provoking and informative keynote presentations by dynamic African women who are STEM leaders, researchers, academics and entrepreneurs. These African women included Prof Eunice Mureithi, chairperson of African Mathematical Union (AMU) commission of African Women in Mathematics; Dr Elizabeth Rasekoala, president of African Gong – the Pan-African Network for the Popularization of Science & Technology, and Science Communication in Africa; Prof  Jill Adler, SARChI Mathematics Education Chair at the University of the Witwatersrand; and Prof Irvy Gledhill, visiting adjunct professor at the University of the Witwatersrand. Another speaker was Prof Loyiso Nongxa, vice-President of the International Mathematical Union (IMU). Their presentations gave an overview of the status, challenges, and opportunities of African women in mathematical sciences. They went further to highlight essential elements and challenges concerning socio-political-hegemonic constructs of mathematical ability through the lens of paradigms of gender, race & social class, mathematics in mathematics education.  Also, the presentations provided insight on strategic policy development and funding framework in the National System of Innovation, the role of mathematics in mathematics education, and how to measure and reduce the gender gap in mathematics and natural sciences.

The participants were also engaged. They were provided with a reflective, insightful and engaging interactive mix of break-out sessions. Such sessions included mentoring and women’s advancement in mathematical sciences by Dr Rasekoala, which offered practical strategies on how participants can be effective, enrolled and sustained partners for change in the advancement of their female peers and colleagues, taking into account a holistic life-cycle and African-centric approach. Ms Mmabatho Mokiti, Founder and CEO of Mathemaniacs, introduced why STEM needs another “E” (Entrepreneurship), which offered  participants an understanding on why women in STEM are not venturing into entrepreneurship, the challenges that are holding them back and how they can move forward to start exploring a career in entrepreneurship. The session also covered topics in public engagement and communicating mathematics for social development by Dr Rejoyce Gavhi-Molefe. In this case, the participants had an opportunity to reflect on their research journeys as mathematical scientists, discuss the societal impact of their research, and strategies to plan a public engagement within the context of mathematical activity for a broader audience. A research advancement and publication by Dr MT MaseTshaba, Lecturer at UNISA, offered practical takeaways such as finding a niche market in academia and establishing relationships with peers.

The highlight of the second day of the workshop was an inspirational panel discussion. The topic for the panel discussion was The so-called NEW South Africa in Research & Academia. The panellists included Prof Eunice Mpako-Banda, professor at the University of the Witwatersrand; Dr Dephney Mathebula, a lecturer at the University of Venda; and Dr Inger Fabris-Rotelli, a senior lecturer at the University of Pretoria. The discussion was moderated by Dr Rasekoala who asked the panel members to reflect on their personal experience of the divergence between the rhetoric of the transformation agenda and the reality in academia/research in South Africa and the particular challenges of the field of mathematical sciences within the South African scenario in Academia/research. Panel members were also asked to map a way forward in terms of closing the gap between the expectations and realities of women academics/researchers in Academia/research in the South African arena. The panelists had undertaken good efforts to engage with the participants in various issues.

“The panellists really touched on real-life situations that African women in STEM encounter, mainly being that their voices are not heard. This is an indication that we must stand together as women and support each other, otherwise we will always be led by men,” said one of the participants.

The workshop served to launch the SAWMSA as a platform for continued, dialogue, networking, coordinating and advancing the South Africa women in the field of mathematical sciences. Formally declaring the launch of SAWMSA as a Chapter Of the AMU, Prof  Mureithi shared her words of support with the participants:

“It is my fervent wish and hope that SAWMSA will be enabled and supported to undertake strategic and inspiring trajectories towards achieving its core mission of coordinating and advancing the SA women in the field of mathematical sciences“.

In giving some words of guidance, caution, wisdom and good practices for the long hard work and journey that lies ahead of the newly launched SAWMSA, a midwife to the birth of SAWMSA, Dr Rasekoala, cautioned the audience of the perennial trap that befalls many women’s associations:

“…one is that of becoming advocates of what I call perpetual, the problematization of women’s victimhood. The other trap is to become a self-satisfied and smug platform for those women who deem themselves to be of the “I have made it” mentality, preening themselves of their achievements and creating a false illusion that because they have made it, all is well and women have triumphed”.

Dr Rasekoala pleaded with the participants to take the hard middle road that lies between two sinkholes that trap so many women’s associations: To operate the association that both advocates for the further advancement of women in mathematical science, while also lauding and recognising the progress that has been made without resting on illusionary laurels. Also, an association that is wired to the growing of the field and the progression of young emerging women scholars in the field avoiding the silos of entitlement, seniorism, elitism, and vacuous leadership.

Speaking on this official launch, Dr Gavhi-Molefe said, “the workshop was extremely successful, laid significant groundwork for future SAWMSA activities. Through SAWMSA, we are creating an enabling environment for women in mathematics and mathematics education to engage, share, build relationships and empower each other”.

Dr Rasekoala words of guidance were critical as participants used them as a base during SAWMSA inaugural meeting where an interim Steering Committee was appointed with a mandate to establish the association in its first year of operation and to appoint qualified candidates to serve on the Executive Committee.

The workshop was jointly organised by AIMS South Africa and UNISA represented by Dr Rejoyce Gavhi-Molefe and Ms Karabo Makola, House of Science intern; Prof Zingiswa Jojo, associate professor at UNISA’s College of Education and AMU Commision-South African Chapter, respectively. It was generously supported by grants from the IMU – Commission for Developing Countries (CDC) and the National Research Foundation (NRF). The workshop was chaired by Dr Thama Duba on the first day and Prof Lindelani Mnguni on the second day. Dr Jabulani Dhlamini, chair of UNISA’s Department of Mathematics Education gave a welcome address.