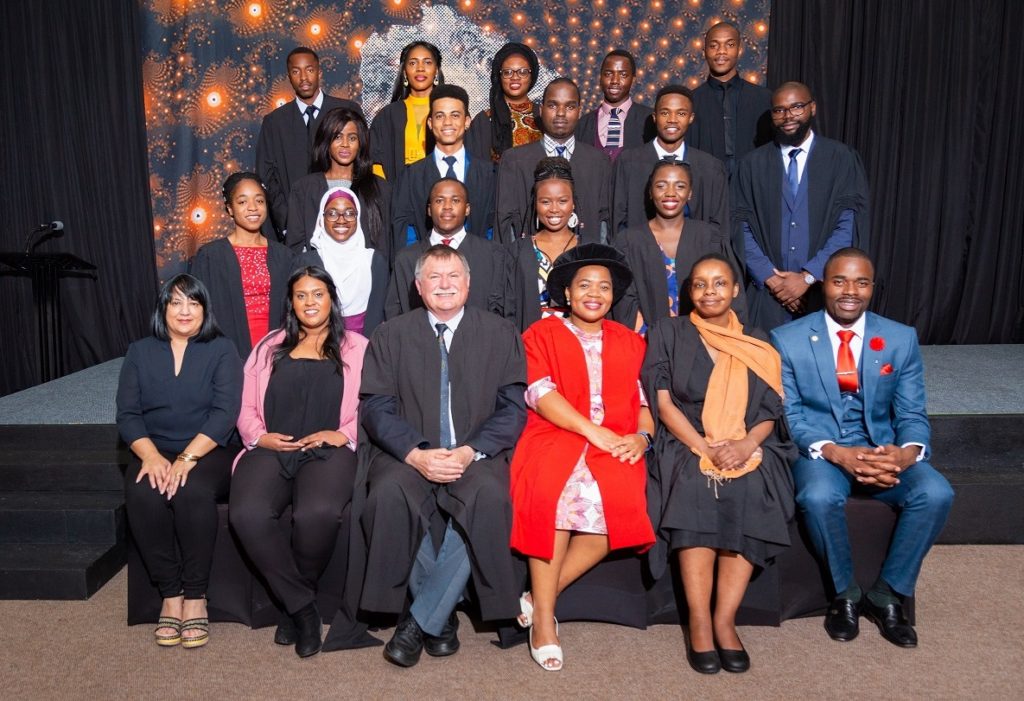 AIMS recognises the achievements of its students

AIMS South Africa celebrated the success of its eighth group of January intake students at a special Recognition of Achievement Ceremony held at its centre in Muizenberg on 14 November 2019.

Sixteen students (including 10 South Africans) received their AIMS Master’s Recognition of Achievement Certificates and will graduate next year through the partner universities that they are registered at. These graduates join the AIMS South Africa alumni group which brings the total number of graduates to 828, of which 35% are women from 38 different African countries, since the Institute was opened in 2003. In total, 96 South Africans (including 33 women) have graduated from AIMS South Africa.

“AIMS did not just teach me about technical skills but it also taught be about life skills. I was taught to challenge myself, to always be on the lookout for ways to grow and to have confidence in my abilities,” said Ms Blows

Mr Mphephu added that AIMS equipped him with unique problem-solving and programming skills, presentation and communications skills and exposed him to a diverse network. “Our country is in dire need of the skills that you have obtained here and I encourage you to go out and tell your peers to come to AIMS so that we can create the next generation of intellectuals that can drive change in our country.”

In the student address Ms Tshenolo Thato Daumas noted, “I have gained brothers and sisters from all over Africa, in fact from all over the world and this is the most prized possession that I have obtained during my time at AIMS.” Mr Kibidi Alexander David Neocosmos had this message for his fellow students, “Don’t squander the opportunity we have we been given here as we are the Einsteins of tomorrow.”

In 2013 AIMS introduced the Ben and Mary Turok Award for Excellent Achievement. This award was made possible by a generous donation from Prof. Neil Turok, the founder of AIMS and then Director of the Perimeter Institute for Theoretical Physics in Canada. This award has been donated to honour the very generous roles that Ben and Mary Turok have played in establishing the first AIMS Centre on the continent and their continued interest and support of this Pan-African project. This award went to South African student, Ms Tshenolo Tathu Daumas. whose research project focused on machine learning processes to predict the interactions between peptides and MHC-II molecule.