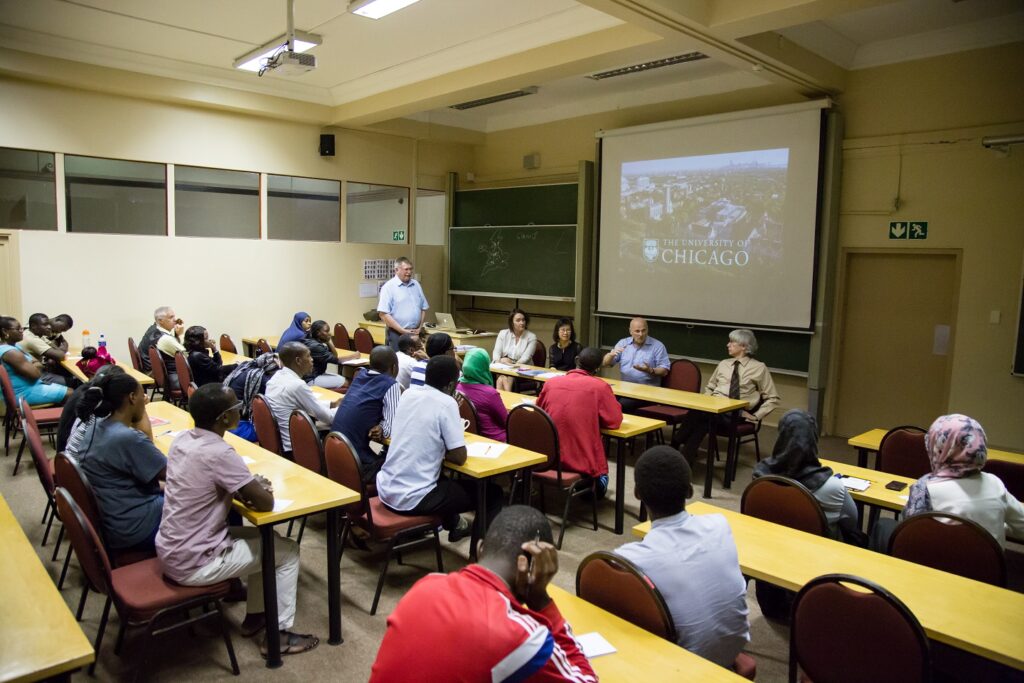 Young-Kee Kim is devoted to understanding the origin of mass, which manifests itself as weight under the force of gravity. She has studied the two most massive particles, the W boson and the top quark, at Fermi National Accelerator Laboratory in order to better understand how particles acquire mass. Kim is former co-spokesperson (co-leader) of the Collider Detector at Fermilab experiment, and former deputy director of Fermilab. In 2005, Kim received South Korea’s Ho-Am Science Prize for outstanding achievements in basic research. The prize honors Kim’s contributions at CDF to the understanding of fundamental particles and their interactions.

Subatomic-particle research has made enormous progress in the 20th Century by looking inside matter at deeper and deeper levels. It is as if we were peeling the layers of an onion in the hopes of finding more basic rules for the structure of nature. Although the concept of the ultimate building blocks of matter has been modified in several essential respects in the last century, Democritus’s idea remains at the foundation of modern science. Great experiments of the 20th century have led to the discovery of ever-smaller entities that make up what were once thought to be indivisible particles. Starting with the atom, they uncovered the nucleus, which was made of smaller particles such as protons and neutrons. These have themselves been dissected into even smaller particles. Moreover, this theory of the very small has been shown to be intimately connected to the largest scales imaginable – cosmology and the beginnings of the universe. Despite these considerable successes, this current theory nevertheless has within it the seeds of its own demise and is predicted to break down when probed at even smaller scales. By using our increased understanding we continue to peel away at the more hidden layers of truth with the hope of discovering a more elegant and complete theory. But as is the case with the onion, we must wonder whether there will ever emerge an ultimate layer where the peeling must stop.

Sidney Nagel’s work has drawn attention to phenomena that scientists have regarded as outside the realm of physics, such as the science of drops, granular materials and jamming. Another area of emphasis is his attempt to understand the properties of disordered materials. A perfect crystal of a chemical element or a compound is composed of an ordered arrangement of atoms, but in a disordered system-a glass, for example-the atoms are in disarray. Disordered systems also exist on a larger scale, as with the sand grains in a sand pile. Nagel’s honors include election to the National Academy of Sciences in 2003 and the American Physical Society’s Oliver Buckley Prize in 1999.

Because fluids flow and readily change their shape in response to small forces, liquid drops have frequently been used to model phenomena as diverse as the dynamics of star formation or the statics of nuclear shape. The exhilarating spray from waves crashing onto the shore, the distressing nighttime sound of a leaking faucet, or the indispensable role of bubbles dissolving gas into the oceans attest to their ubiquitous presence and profound importance in our everyday world. A liquid drop, as it breaks into pieces, is also an excellent starting point for investigating topological or shape transitions. Although part of our common experience, these changes are far from understood and upon careful investigation reveal delightful and profound surprises. In this lecture, I will give the life history of a liquid drop – from its birth to its eventual demise as it fades into memory – illustrating the passage of its existence with the scientific surprises that determine its fate. The commonplace is extraordinary!

We are customarily taught to understand ordinary solids by considering perturbations about a perfect crystal. This approach becomes increasingly untenable as the amount of disorder in the solid increases; for a glass with no well-defined long-range order, a crystal is a terrible starting point for understanding the glass’s rigidity or its excitations. Is there an alternative – the opposite of a crystal – where order, rather than disorder is the perturbation? Jamming is an alternate way of creating rigid solids that are qualitatively different from crystals.

Dr Hakizumwami Birali Runesha is the Assistant Vice President for Research Computing and founding Director of the Research Computing Center (RCC) at The University of Chicago. He is the president elect of the Great Lakes Consortium for Petascale Computation (GLCPC), USA. Prior to joining the University of Chicago, he served as Director of Scientific Computing and Applications at the University of Minnesota Supercomputing Institute, Research Associate at the Hong Kong University of Science and Technology, Research associate for the Multidisciplinary Parallel-Vector Computer Center at Old Dominion University, and Assistant Professor in the Civil Engineering Department at the University of Kinshasa (Faculté Polytechnique). Dr Runesha holds a PhD in Civil Engineering from Old Dominion University and has more than 25 years of experience in high performance computing and scientific software development. His research interests are in parallel computing, big data analytics, sparse numerical libraries, medical devices, finite element analysis and design optimization in engineering. He has developed open source software programs and fast parallel solvers for large-scale finite element applications.

Advances in computer architectures coupled with advances in algorithm development have paved the way to transformative research results that were not otherwise possible. In the past thirty years, we have seen fundamental shifts in microprocessor development away from increasing clock speeds and single core performance toward multi- and many-core architectures where performance benefits are not ‘free’ to the software developer.   While hardware is changing at a fast pace, software is lagging behind. Additionally, we have entered the era of big data science, marking a fundamental shift in the role of research computing and machine learning.

This presentation will provide an insightful review of the paradigm shift of computer technology and discuss challenges for developing efficient mathematical numerical models and algorithms for solving complex problems on these new computer systems. Two cases will be discussed (1) the development of sparse indefinite solver for structural engineering applications, and (2) current simulation results in creating an “as accurate as possible” fluid-structure interaction (FSI) model for simulating the dynamics of the right atrium (RA) of a real heart, with and without an implanted pacemaker wire.